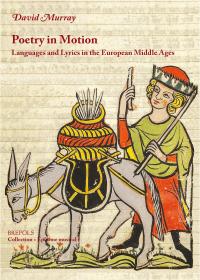 Poetry in Motion traces the fascinating travels of medieval courtly song around most of western Europe, and tells the story of what poetry, poets, and their scribes had to say about vernacular languages.

The medieval courtly lyric, the site for the first extended literary exercises in Occitan, French, Italian and German, is one of the foundations of how we think about European literature. Since the nineteenth century it has in many accounts underpinned a system of linguistically-informed national traditions. David Murray shows in ‘Poetry in Motion’ how categorizing poetry under headings like ‘French’ or ‘Italian’ poetry can obscure the thinking of medieval poets and scribes about what constituted a language. Rather than existing within a series of rigidly distinct linguistic systems, Murray demonstrates that song moved in a fluid environment where linguistic boundaries could be easily crossed. Aided by its melody, metrical form or quotation in a larger text, a song could travel and elicit meaningful reactions and interactions far from ‘home’. Combining literary studies with philology, manuscript studies and musicology, ‘Poetry in Motion’ shows the truly European reach of song in the Middle Ages.