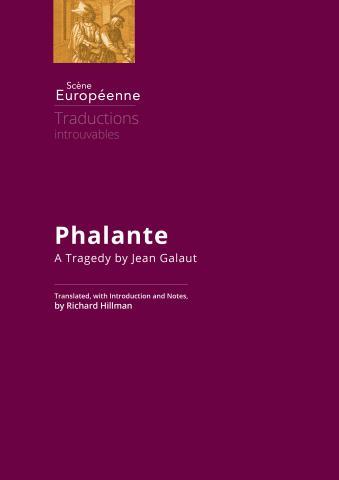 This tragedy, intriguingly poised between the humanist model and the emerging baroque aesthetic, is based on a story narrated by Helen, Queen of Corinth, in the Arcadia of Philip Sidney (bk. I, chap. 11). Indeed, it has a claim to be the first substantial French adaptation of an English literary work – a claim all the more remarkable because, almost certainly, no translation of Sidney’s romance would have been available to the author, who nevertheless displays a detailed knowledge of that text (probably in its first published version of 1590) beyond the episode in question.

That episode concerns the tragic consequences of a rash error on the part of an unsuccessful suitor to the queen, who has commissioned his friend (Galaut’s Phalante) to woo on his behalf. The queen falls in love with Phalante instead, who rejects her advances out of loyalty to his friend. The latter, however, pursues Phalante for his supposed treachery, and Phalante inadvertently kills him. Galaut develops the tragedy beyond his source by adding the successive suicides of the queen, who believes Phalante to be dead, and of Phalante himself, who proves to have been as strongly in love with her as he was devoted to his friend. Reinforcement also comes through rhetorically dense and intense monologues in the Senecan vein. Enriching their effect, paradoxically, is a lingering pastoralism redolent of Sidney’s work, which maintains an intertextual presence throughout.

Galaut belonged to the highly cultured legal and administrative milieu of Toulouse. Phalante, which appeared in a posthumous collection of his poetry published in 1611, would seem to have been his only dramatic composition. There is evidence pointing to a performance some years later. On the other hand, there are no stage directions in the published text, and Galaut’s dramaturgy, which is notably clumsy at times, serves mainly as scaffolding for rhetorical elaboration.